The antioxidant function of glutathione makes it critical for cellular energy generation in the mitochondria, which are the body’s energy generating factories. Chronic illness and long term toxin exposure may deplete stored glutathione as well as hinder its production. The body’s ability to make glutathione naturally declines with age, so just when aging individuals become more susceptible to illness, their immune systems may not be functioning optimally. S-Acetyl Glutathione Supplemental may provide more of this compound than the body is able to generate on its own. 200 mg of S-Acetyl Glutathione & N-acetyl-cysteine (NAC) and vitamin B6, both of which are important for the production of glutathione.

S-Acetyl Glutathione is the single most protective antioxidant produced by the body and therefore the most important, as it protects cells against oxidative stress from free radicals. In addition to its powerful antioxidants capacity, glutathione may help support immune function and is a crucial compound for facilitating effective detoxification processes in the liver. (Detoxification helps remove harmful compounds that enter from the outside as well as those our bodies generate internally from normal, healthy metabolism. 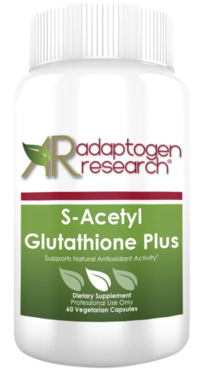