Although diindolylmethane has been claimed to be the preferred form for dietary supplementation, published evidence does not adequately support this conclusion. The bulk of scientific data reports benefits from taking I3C. Data in direct support of taking DIM alone is suggestive but still inconclusive. Rather, it appears that the total content of dietary indoles is most relevant. Indole Plus contains I3C, DIM, and other indoles for more complete protection. Increased indole intake may be especially important for women or men with estrogen-related health conditions. 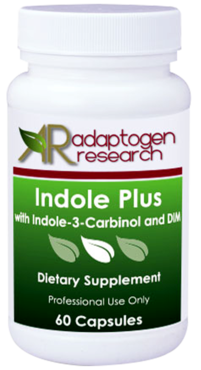 Manufactured in a GMP Registered Facility in the USA

Dietary indole compounds as found in broccoli, cabbage, and other cruciferous vegetables exert a strong protective effect on tissues such as breast, cervix, and prostate that are most susceptible to the effects of undesirable estrogen metabolites, such as 16-alpha-hydroxyestrone. Indole compounds favorably influence steroid hormone metabolism and help rebalance estrogen in favor of 2-hydroxyestrone, a protective estrogen metabolite.

contains a broad-spectrum mixture of dietary indole compounds found in broccoli, cabbage, cauliflower, turnips, and other cruciferous vegetables. These compounds are noted for their ability to protect reproductive tissues in both men and women from the effects of undesirable estrogen metabolites. Indole Plus provides concentrated amounts of indole-3-carbinol (I3C), diindolylmethane (DIM), and related dietary indoles. Why is estrogen balance important for healthy breast and other reproductive tissues? Breast, cervix, prostate and other reproductive tissues rely on a healthy balance of estrogen hormones to maintain their normal structure and function. Unfortunately, the normal healthy ratio of estrogen metabolites can be interrupted by exposure to pesticides as well as by poor diet and genetic factors. The liver plays a crucial role in the metabolism of estrogen by converting it into a cell-protective form called 2-hydroxyestrone. When certain liver enzymes are not working adequately, estrogen may instead be converted to undesirable forms such as 16-alpha hydroxyestrone. Abnormal cell growth and altered tissue function may result.

I3C is a major dietary indole compound in cruciferous vegetables with important cell-protective actions and estrogen-balancing effects. These benefits have been documented in both animal and humans studies in which dietary supplements of I3C were used. DIM is one of the major breakdown products of I3C that is formed in the stomach in the presence of stomach acid and then absorbed into the bloodstream. This indole compound may be responsible for many of the beneficial actions of I3C. However, research has not identified the exact indoles responsible for all of the specific benefits observed when I3C is supplemented. I3C is also converted to other indole compounds besides DIM. Indole (3,2,b) carbazole (ICZ) is one of these compounds that has similar activity to DIM and I3C on estrogen metabolism.

Unlike most indole supplements that contain either pure I3C or DIM, Indole Plus contains a mixture of both. Preformed DIM is included to be sure that adequate amounts of this important indole are readily available. However, since giving DIM alone might overlook the important actions of I3C and other I3C breakdown products, Indole Plus provides a broad-spectrum of dietary indoles for maximum protective benefit. Each capsule supplies 400 mg of total dietary indoles.

Anyone who wants to enhance his or her diet with a broad-spectrum indole supplement can take Indole Plus. It may be especially helpful for men or women with estrogen-related health conditions. Indole Plus can be used to support healthy estrogen metabolism, including efficient liver detoxification of both internal estrogen metabolites and estrogen-like compounds found in certain pesticides and other environmental substances.

The total content of indole compounds supplied in one or two capsules daily of Indole Plus is consistent with amounts showing clinical benefit and safety in human supplementation trials. Unless your healthcare practitioner specifically recommends higher amounts, one or two capsules taken daily on a routine basis should be sufficient.

Keeping estrogen in balance supports and protects tissues most sensitive to the potentially damaging effects of harmful estrogen metabolites. Thus, the structure and function of cells found in breast, cervix, endometrium, colon, and prostate tissues may be most responsive to enhanced indole intake. Benefits of supplementation will vary depending on the specific tissues affected. For example, women with premenstrual symptoms may notice reduced breast tenderness, while other benefits may be more subtle and take place over time as cell function improves and healthy estrogen balance is reestablished.