Lipoic Acid Chemical Forms: the R and S Isomers
When Alpha-Lipoic Acid is synthesized in a laboratory, a 50/50 racemic mixture of the R and S enantiomers results in what we call R/S Lipoic Acid, which is the most popular form of commercially available Lipoic Acid (also named RAS Lipoic Acid or All Racemic Lipoic Acid). Our patients know it as simply Alpha Lipoic Acid.
New technological advancements have allowed for the stabilization and isolation of the RLA (R-Lipoic Acid isomer), which is believed to account for all the benefits seen from studies with R/S Lipoic Acid. Supplementing with pure RLA, thus eliminating the presence of SLA (S-Lipoic Acid isomer), creates new opportunities for intensive nutritional support because SLA is believed to interfere with the effectiveness of RLA.
How is Stabilized R-Lipoic Acid Different From Other R-Lipoic Products on the Market?
R-Lipoic Acid  is a highly unstable compound that easily polymerizes into a sticky rubber or glue-like substance if it is not prepared, stored and processed correctly. This will adversely affect bioavailability. Stable RLA is a non-hygroscopic, non-polymeric potassium salt form of RLA. The capsules are heat stable, characterized by fast dissolution rates, high solubility and absorption. They are also free of residual solvents and moisture. There are wide variations in the R/S ratios and total polymer contents of raw material and finished products now on the market. Few supplement companies have experience with RLA and are unaware of the myriad of problems associated with its encapsulation and stability.

Adaptogen Research Stabilized RLipoic Acid Plus  is sourced from the only stable and highly bioavailable form of R-Lipoic Acid available on the market Compared to SLA, RLA causes 50% higher peak plasma levels of lipoic acid and 60-85% higher total absorption.   Feeding lipoic acid to animals at risk of cataract caused a 2-7 fold higher uptake of RLA versus SLA in the lens content of lipoic acid, and reduced the development of experimentally produced cataract by 50%. 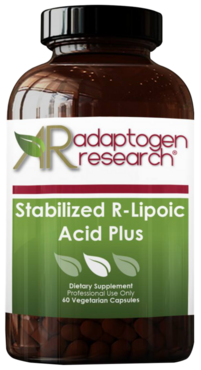 Stabilized R-Lipoic Acid Plus, which many may simply know as lipoic acid, provides a stabilized and isolated RLA (R-lipoic acid isomer) thanks to technological advancements. Since SLA (S-lipoic acid isomer) can interfere with RLA’s efficacy, supplementing with pure RLA provides a significant advantage for intensive lipoic acid supplementation. Once separated from SLA, RLA is extremely unstable. Binding RLA to potassium, as found in this unique product, solves this problem. Unlike other R-Lipoic products, Stabilized R-Lipoic Acid is a non-hydroscopic, non-polymeric potassium salt form of RLA.

Boosts Energy Production/Mitochondrial Cofactor
RLA is the majority of lipoic acid found in nature and therefore likely to fit better as a cofactor for mitochondrial enzymes pyruvate and alpha-ketoglutarate dehydrogenase.5 SLA cannot bind well to these enzymes and actually inhibits them.  Thus the S-form can oppose the action of the R-form. In the aging rat heart, RLA stimulated ATP production, whereas SLA inhibited it.

RLA supplementation improves metabolism, measured as oxygen consumption in liver cells, and improves ambulatory activity in supplemented animals, bringing old treated animals to the level of young animals.  Pre-treatment of brain cells with RLA leads to the restoration of the mitochondrial activity lost due to glutathione depletion

R-Lipoic Acid
R-Lipoic Acid (the R (+) enantiomer) is the form of lipoic acid that occurs naturally in plants, animals and the human body and is responsible for the specific beneficial effects of Alpha-Lipoic acid. R-lipoic acid (RLA) is the only form that functions as a co-factor for mitochondrial enzymes involved in energy production.